If the fact that Maryam Nawaz Shareef and Marvi Memon having no position in Punjab Government but still distributing laptops didn’t shock you enough, here is another gem coming your way:

PML-N is paying its social media team through YOUR tax payments. YES, It’s your money that is being used by PML-N

After the 30th October Lahore Jalsa of PTI, PML-N’s ranks were terribly shaken and to catch up with PTI’s strength on social media, PML-N have resorted to all kinds of tactics including hiring hundreds of paid social media workers who were given the task of making new pro PML-N pages and running mud-slinging campaigns against PPP, MQM and PTI. All these are modern campaigning techniques so nothing wrong with them but question arises how these media teams are being paid?  Where other parties have dedicated volunteers working on social media, PML-N is exploiting the resources of Punjab Government and using YOUR tax money to pay THEIR hired hands for social media campaigns. Take a look at this article by e-tribune http://tribune.com.pk/story/335114/twitter-wars-punjab-sets-up-team-to-handle-social-media/

The question arises: Why are these people hired by Punjab Government and being paid by citizens’ tax money to do social media propaganda in PML-N’s favor and to malign other political parties, especially PTI? Don’t believe this? Take a look at the three names mentioned in the above article.

Now see this: Fraz Tajammul being given job in Punjab IT Board and what is he doing there?

Fraz Tajammul posted above picture of his IT directorate office on facebook.  Now look below and see him being a member of the group, PityForPTI. On whose orders is he doing this? 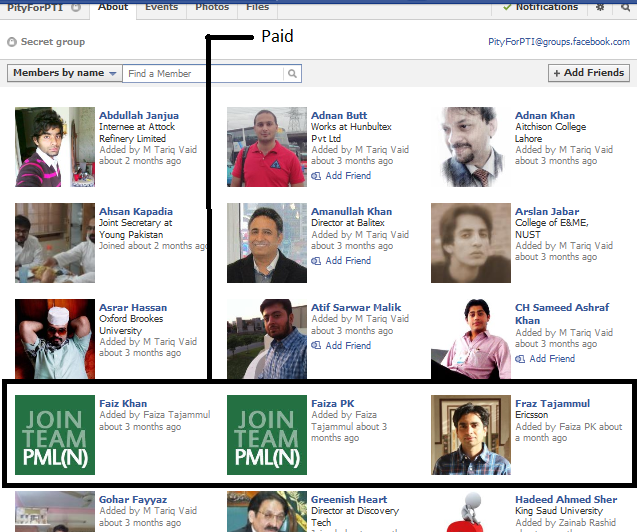 Now see the image below. This is a database of PML-N pages run by their social media workers. See Faiz Khan’s name there? Look closely at No. 19 and No. 25 pages being run by him. And not just him, there are other paid workers like Gohar Fayyaz working full time on PML-N’s payroll to malign other political parties. This is how our tax money is being used by Punjab Government to promote PML-N and creating propaganda against others.

To give a small example of how they work and create false propaganda, take a look at this image. Gohar Fayyaz, Asrar Hassan and Majid Taimoor are all part of PityForPTI and are paid by PML-N by OUR hard earned tax money.

Not onlyPML-N is cheating us out of our money, they are also using all sorts of illegal means to stop other parties from social media campaigning. Take a look at below facebook status by Fawad Khalid, another PML-N social media active member/official youth representative 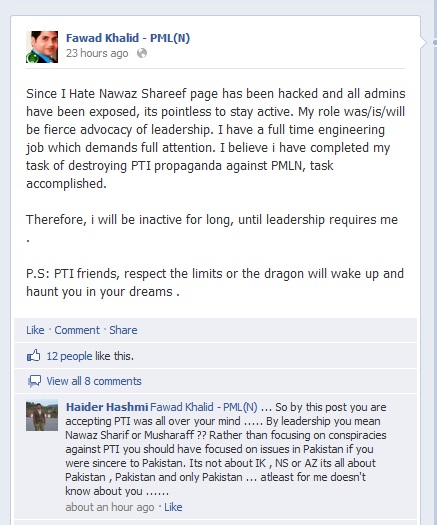 This calls for an enquiry into PML-N’s paid social media team, sponsored by YOUR tax money, OUR tax money. We will not let Punjab Government cheat us anymore. As common citizens of Pakistan, we have a complete right to know why are these people being hired by Punjab Government, paid by tax payers money and are asked to do PML-N propaganda on social media?